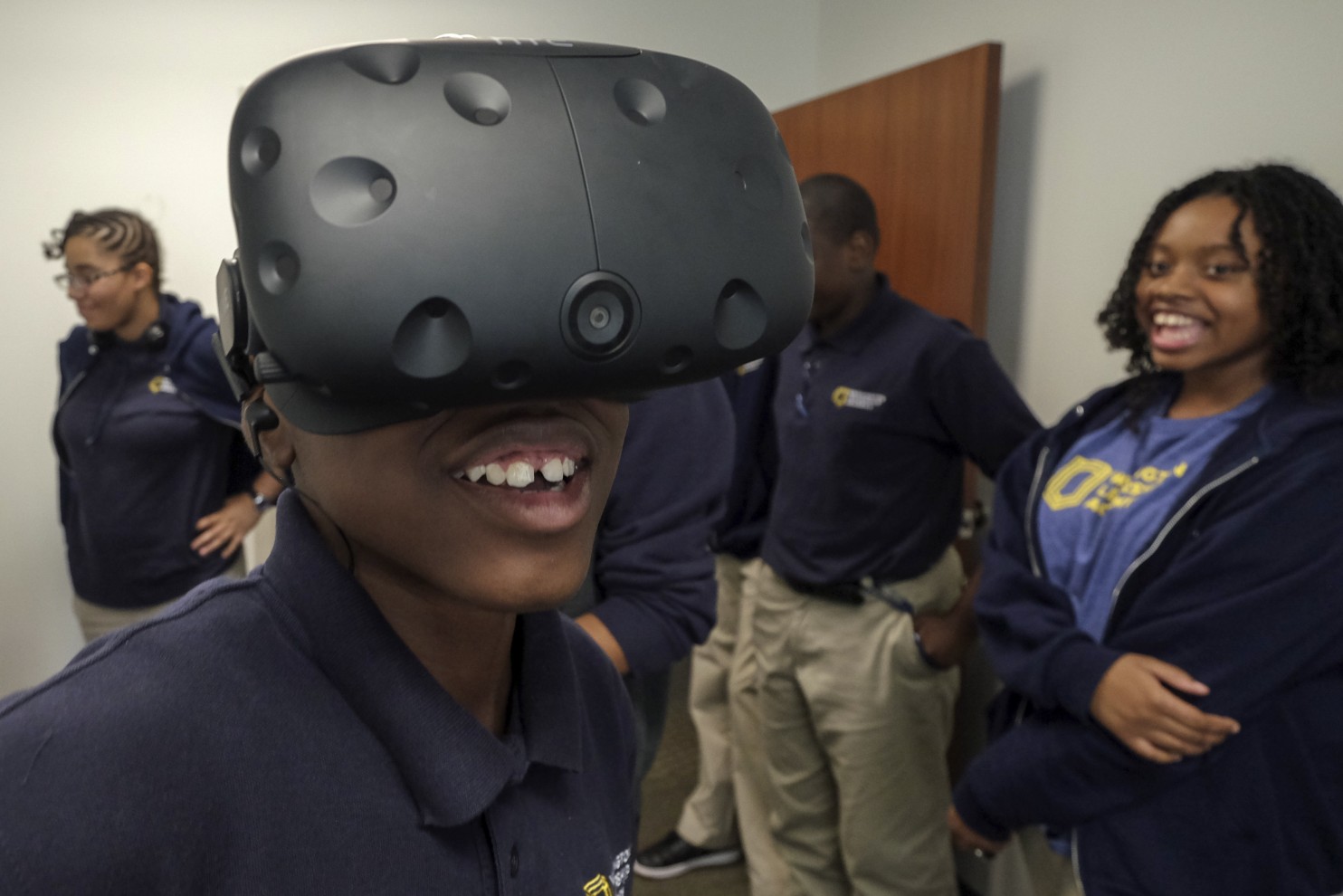 When the Washington Leadership Academy opened its doors for the first time last month, it hoped students would be inspired not only by the stained-glass windows and vaulted ceilings of the former seminary building it occupies but also by the unique brand of education inside its classrooms.

It wants to transform local students’ lives and give them unmatched opportunities in a school that looks like no other in the city.
Now, it also hopes to make a difference for students far beyond the District. The Washington Leadership Academy on Wednesday became one of 10 schools to win $10 million each to show how American public high schools can be reimagined to better serve young people.

The $100 million investment comes via XQ: The Super School Project, a competition that philanthropist Laurene Powell Jobs funded to infuse new energy into the nation’s high schools, where many still teach much as they did a century ago.
Washington Leadership Academy co-founder Seth Andrew said he wants to create tools that will help schools radically reshape what and how students learn.

The academy, which opened its doors for the first time last month, combines online, project-based and service learning with new and emerging technologies such as virtual reality. Someday, the school would like to work with holographic teaching — which could allow a person in Arizona to show up, via hologram, in a classroom in Alaska — and it is putting its plans and operations online for anyone to copy. Eventually, the school will post its lessons, too.

There are millions of public school students who don’t have access to the opportunities they deserve, Andrew said. “Adding one more school is not the goal here,” he said. “You can’t do it 100 kids at a time.”

Philanthropists such as Bill and Melinda Gates, Eli and Edythe Broad and the Walton family, heirs to the Walmart fortune, have played a key role in spurring changes in U.S. education policy during the past decade, doling out millions of dollars in grants to encourage fast-growing charter schools, new Common Core State Standards and teacher evaluations tied to student test scores. The donations have inspired fierce criticism from those who accuse wealthy people of using private dollars to dictate public policy.
The XQ competition was envisioned as a different kind of philanthropy. It asked teams of people in communities around the country to dream up how high school could do a better job engaging kids and preparing them for the real world. It’s not yet clear whether this approach will succeed in being less controversial.

The challenge drew applications from 700 teams of nearly 10,000 individuals — 10 times the number that Russlyn H. Ali, XQ’s executive director, had anticipated. XQ had announced it would award five $10 million prizes, but Ali and Powell Jobs — who is the widow of Apple’s Steve Jobs — doubled that figure in response to the outpouring of interest.

Ali described the money as “risk capital” that would help the winning schools and others who care about education understand more about what might work — and what might not.

Winners were chosen by 42 judges, including many in the education reform movement, such as Teach For America CEO Elisa Villanueva Beard and Cami Anderson, the former superintendent of Newark Public Schools, as well as school system administrators, researchers, college professors, civil rights advocates, an immigration policy expert, a student activist and the artist MC Hammer.

Two of the winners are large, comprehensive high schools with more than 2,000 students: one in Houston, where students will work on solving local environmental problems, and one in Vista, Calif., where students will learn by examining and coming up with solutions for the United Nations Sustainable Development Goals.

A school in Los Angeles will target foster and homeless youth, co-locating with shelters citywide and offer flexible scheduling for students with complex lives. Another will partner with a museum in Grand Rapids, Mich., putting artifacts at the center of the curriculum.

Half the winners are charter schools and half are part of traditional school districts; XQ didn’t want to favor one type of school over the other. “Those are just old fights,” Ali said.
The ideas that rose to the top, Ali said, were those that didn’t allow customs to dictate how schools would use time or space. They are “beacons of what’s possible. They will, I believe, excite the nation.”

XQ expects to announce more financial awards, resources and support for other schools that had promising proposals but didn’t make it to the final 10. Ali said there are dozens and dozens of ideas that they want to “reward and cultivate.”

The XQ prize is only the latest philanthropic boost for the Washington Leadership Academy. The Walton Family Foundation and Breakthrough Schools: D.C., a coalition of local and national donors, also have donated substantial start-up sums, perhaps in part because of Andrew’s track record.

Andrew — who recently stepped down from a White House job, where he was a senior adviser on technology — previously founded Democracy Prep, a network of 17 charter schools that serves primarily low-income students in New York, the District and elsewhere. Democracy Prep has posted impressive standardized test scores, but whereas it is a “no-excuses” school — with strict discipline and behavioral rules — Washington Leadership Academy takes a more relaxed approach.
As they move from class to class, students don’t have to walk silently in lines; they’re allowed to listen to headphones when they’re working independently in class; and they can slouch a little bit. It’s a reflection of an evolution away from the no-excuses approach in the charter-school world.

Stacy Kane, Washington Leadership Academy’s executive director, said that as she and her colleagues visited other schools to build theirs, they saw graduates of no-excuses schools struggling with self-advocacy and self-direction.

“The culture we’re trying to build here is not a lockdown, no-excuses culture. It’s a relationship culture,” Kane said.

The school sees itself as a place to refine and share ideas that could work anywhere. But the founders want to do more than be an example, they want to use the XQ money to create a library of lessons and courses, delivered via virtual-reality technology, that other schools can use.
Andrew said one of their first projects will be to create virtual-reality content for schools nationwide, such as a virtual-reality chemistry lab that could give hundreds of thousands of students a chance to learn science hands-on.

Washington Leadership Academy also is experimenting with a new approach to staffing, tapping into the freelance “gig economy” to hire part-time teachers with specific, hard-to-find skills, such as Silicon Valley programmers who don’t want to leave their jobs but could teach a class remotely.

In-the-flesh freelancers are teaching many of the elective classes — which include photography, DJing and criminal forensics — that students take at the end of each long, 8:30-to-5 day.

The school also plans for all of its students to take computer science for four years, an effort to equip them with skills that are meant to set them apart as they go off to college and look for jobs.

By next school year, Washington Leadership Academy plans to more than quadruple the number of African American students in the city who have access to Advanced Placement computer science. In 2015, there were just 30 black students who took an AP exam in computer science. There are 110 freshmen at Washington Leadership Academy this year; almost all of them are black, and the school plans for each of them to be ready to take an AP exam in computer science at the end of their sophomore year.

Khalilah Sutton, 13, said she was excited about Washington Leadership Academy because she wants to work in the tech industry. Coding is one of her electives, in addition to her basic computer science course.

“I chose this school because they had opportunities here that would help me achieve what I want to do later in life,” she said.